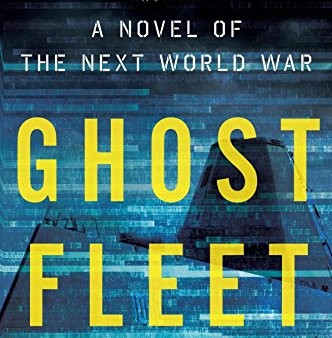 I don’t usually get my speculative fiction reading suggestions from The Economist, but I found a recommendation for Ghost Fleet: A Novel of the Next World War in the reviews section of the June 27th edition, and since I trust the Economist not to (at least in general) provide positive recommendations for weak writing or unintelligent prose, I figured it was a pretty safe bet that the book would be a good read.

My trust, I am happy to report, proved well-placed. The book is a well-told near future story driven by a large cast of believable (if not particularly lovable) characters. The style straddles the gap between the Tom Clancy combat narrative style and a Pentagon policy paper on future defence strategies. Given the author’s credentials in the latter respect, the novel benefits from believability, depth and a knowledge of the subject matter that’s not a regular feature of my reading. At least in the SF genre.

This is most obvious when referring to the copious footnotes, an exercise that was a lesson in itself because much of what I initially assumed was speculative was, in fact, not speculative at all. The authors applied their imagination to what might be done with the current bleeding edge of technological development, and pushed technology only a little into the future. How do these capabilities affect geopolitics, naval warfare, communications vulnerabilities and so on, that is where the initial thrust of the book is directed, before we get to the action.

The book is also unashamedly military in its approach – much of the near-future geopolitical ideas I have read focus on tropes like a hacker in one country making nuclear power plants go critical in another. It is perhaps because this risk is so often talked about – and therefore mitigated – that the authors focus elsewhere, with direct “hack attacks” taking only a supporting role in the development and execution of their war.

The story starts with energy shortages, in the form of diminishing oil and natural gas reserves – the consequence of a previous conflict that enveloped the Middle East and clearly left its traces on the international political landscape. China’s communist government has collapsed, replaced by a balanced coalition of Chinese military and corporate interests, and this new “Directorate”, has a far colder and more ruthless view of the world’s future energy and power balance than does the West.

A discovery of a vast gas field under the Pacific leads the Chinese government to launch an all-out coordinated assault to secure global domination and thereby ensure that the new energy reserves are theirs and theirs alone. Supported by years of planning and infiltration, their plan is extremely effective, and all the more frightening for how simple and believable it is.

There closes the opening act, and from here on we will see how the rest of the world responds, how old and new technology must be repurposed, harnessed and adapted to recover from an initial strike so effective it almost wins this unexpected war in a single act.

We follow the action from a great many viewpoints, including policy-making sessions in both China and the US, the decks of warships, the computer terminals of Chinese hackers, the astronauts participating from orbit and the resistance fighters on Chinese-occupied Hawaii, to name but a few. The writing is fluid – even though the viewpoint changes a little too frequently for my personal tastes – and there is a strong sense of the authors having worked (or having been worked) very very hard in order to reach the clipped and comprehensible prose that the book deploys with great success.

While this will not satisfy those who seek true science fictional weaponry or technology, let alone aliens or faster-than-light travel, the novel is a very satisfying bridge between where we are today, the technology of tomorrow, and the forces that will decide how these get used.