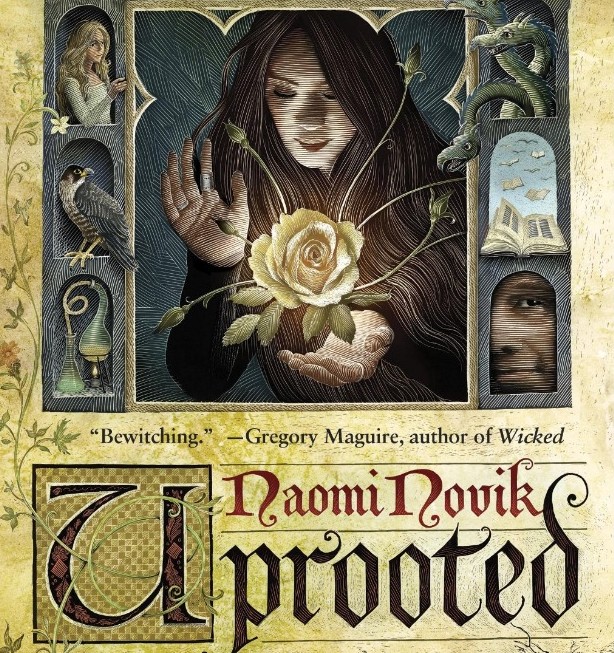 I was a little dubious of Uprooted , in large part because several reviewers classified it as Young Adult, which is not my preferred genre, and I really wanted something I could enjoy selfishly while I was travelling.

I needn’t have worried. While there are overtones of the Young Adult style, there are clearly scenes and themes that stretch well beyond the borders of teenage fantasy.

Set in a world that is evidently based on Poland (our heroine is Agnieszka, the wizard wears a Zupan, the country is called Polnya), the main events occur in a set of villages and towns at the perimeter of a bewitched forest, and in the capital, where political intrigue gets in the way of any form of logical or coherent decision, as is so often the case in works of fantasy.

I enjoyed the writing style and I thought that the pace of the novel was close to perfect – I rarely had the urge to jump ahead a few pages, a problem that plagues me as soon as I feel a story is beginning to stall, nor did I have to stop and go back to figure out what was going on.

I understand, however, why some others thought this might be best categorized as a Young Adult novel, and this is driven largely by simplicity in characterisation and fairly linear storytelling. It all unwraps like an intricate work of origami, neatly leading to a culminating moment. The characters are nearly clustered at each end of a simple spectrum, either fooled into acting on behalf of the enemy, or unimpeachable in their dedication to the cause. This is neither good nor bad, and facilitates the flow of the story, but is a feature of young adult novels rather than more complicated, character driven stories that deal with moral ambiguity, true conflicts of interest and ethical dilemmas where every answer is a wrong answer.

I enjoyed the read and powered through the book faster than I thought I would. While the ending is coherent and neat, I felt it was perhaps a little too much so, to the point of being a little trite, I can’t say more for fear of spoiling it, other than to say that I felt there was a lack of people among the survivors getting their comeuppance (or showing real remorse) for the abject stupidity and selfishness of their actions.

Magic is depicted as a talent-based career requiring study and mastery, rare but not so rare that it alienates its practitioners, and key to the survival of the realm. The culture is not very developed, but familiar, leaning of our pre-existing understanding of castles, courts and cities. The book doesn’t impose a radical re-imagining of the world upon the reader.

If you like the fantasy genre, this is a good example, with solid storytelling, an enjoyable story and a very likeable heroine that’s easy to relate to.