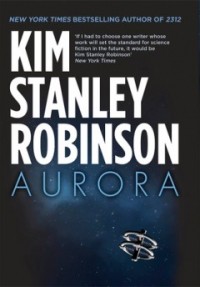 There’s an introspective and meditative quality to Robinson’s novels that comes, I think, from his avoidance of page turner strategies. He avoids chapters that end in suspense, making you want to know what happens next, and we don’t get the multiple interwoven storyline treatment that allows the author to always have one cliffhanger active at any given time.

So what we get is a novel that is more centred on real, physical challenges faced by the population of our interstellar ship. Problems related to closed-loop ecologies, population control, artificial intelligence (and its definition), and the concept of authority and hierarchy on a multi-generational starship. These are all tackled in a fictional context, but with great attention to the inner workings and intricate details of each challenge.

There is a clear sense that Robinson has a stack of research on his desk a mile high.

The story covers the last few years before a starship launched from earth several generations ago arrives at Tau Ceti, its destination. The people on board have never known Earth, and are aware only of their own small microcosm – the Ship. We see events unfold through the life of Freya, the daughter of a well-known member of the community, Devi. Unlike Devi, who is, by virtue of her understanding of the ship’s mechanisms, the default engineer in chief, Freya lacks the mind for the task and is more interested in how people behave.

As an investigation of the difficulties of reaching far-distant stars through the use of long-lived starships, the novel is extremely thought-provoking and challenges the often-made assumptions that allow us to do away with considering the real problems such an endeavour would face. For example, Robinson undertakes a detailed examination of the chemical reactions that immobilise vital elements that are in short supply, and the resulting effects on the ability of the ecosystem to continue to function. Through this part of the story, he demonstrates that the problem-solving required in even this single discipline is insufficiently developed at this time for us to even consider a project of this kind. We depend on so many things that our environment on Earth provides without our needing to manage it that we are ill-prepared to take on the challenge of recreating the right conditions for long-term life away from our cradle.

In a way, the novel is slightly defeatist in this regard, and perhaps that’s a shame, because such an in-depth investigation could have led somewhere more rewarding without the need for sugar-coating. Some of the challenges (perhaps the most difficult and insurmountable) faced by the population of the ship are somewhat deus-ex-machina in terms of their formulation, and the premise that any planet worth occupying will already have some form of life inimical to our own is not necessarily something that I feel is properly explained or defended in the book.

Nevertheless, Robinson has taken the premise of a generational starship reaching for the stars further and deeper than anyone before, and while the novel may not leave you with the sense of wonder that drew some of us to the science fiction genre in the first place, it is an enriching narrative, a good story and an extremely valuable addition to the science fiction bookshelf.