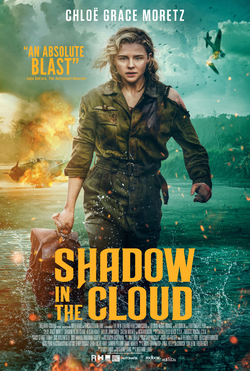 First, a few words about what I really liked about the movie.

I’m not very familiar with Chloe Grace Moretz‘s acting, but she was fantastic in this. She has great charisma handles the intensity of the camera, alone, for long periods of time.

The special effects are good. At no point do you think, “that’s just bad CGI”. Only a few scenes are ambitious, complete-CGI efforts, and those are pretty seamless. That said, the scene when she falls out of the plane and is blown back into it is so gravity- and reality-defying that it would have felt more at home in a Marvel movie.

There’s a lot wrong with the film.

Her purpose on the flight, the presence of the enemy where they shouldn’t be, and the creature on the plane with her, are all completely separate narratives that just happen to coincide.

No effort is made to explain why any of these things happen to her, or to this flight in particular. It’s just really bad luck.

Usually, in a horror movie, bad things happen to people for a reason. An evil spirit haunts the castle. The victim called evil upon themself through an act of betrayal, foolishness, selfishness, greed of deceit. An enemy targeted them for a reason that makes sense. Whatever.

Here’s it’s just dumb luck, to the power of three.

That makes everything feel disjointed. As a viewer you’re looking for some sort of unifying narrative that joins all the disaparate pieces of the storytelling machinery together. Here, three different wheels turn independently of each other. They only mesh insofar as our protagonist is facing all these different challenges at once.

In addition to this, the film places a strong emphasis on the crew and their animosity toward a newcomer on their aircraft. Ok. So they’re a bunch of alpha-male-wannabe macho wartime lads. A third of the film pivots around this overwrought dynamic, which also depends on her being isolated in a part of the aircraft where she can’t interact with them directly.

I get what the film’s trying to do, but unfortunately it feels contrived.

While it lasted, I enjoyed it, even if bits of the film were a bit clichéd. Once it was over, I reflected on it for a few moments and what I felt was… disappointment.

I felt that Moretz’s performance was a bit wasted. The rest of the film just doesn’t hang together very well, requiring us to believe in improbably enemy action, the presence of creatures from a horror trope and a super-unlikely personal situation, all in the confines of an aircraft with a crew of mysoginists completely lacking in self-awareness. No matter how well she plays her role, there’s just no turning the pastiche of tropes into a well-sewn-together narrative.

My final conclusion: A missed opportunity. I think the film had a good premise, some solid acting and a great team. The script probably needed a few new sets of eyes and a couple of rewrites so everything hung together better.