I find I’ve grown into Cogman’s novels set in parallel worlds connected through her great Library. Her confidence and comfort writing in this world that she’s created also seems to have reached new levels with this latest instalment, which also benefits from not needing to introduce the characters, since we know them from the previous novel.

Despite her heroism in saving the day in the previous novel, Irene the librarian is on probation for breaking quite so many rules in the process. She is therefore given sub-par assignments that are riskier than usual, but she seems to be taking it in stride. Meanwhile, the Library, eternal and unmovable and outside of space and time, is under attack. Quite how this is being achieved is not understood, but old enemies rapidly appear in central roles and a conspiracy begins to appear on the stage.

Our heroine, relegated to the sidelines by her superiors, finds herself rapidly drawn back to the center of current events, due in large part to a pre-existing relationship with the malefactor-in-chief. As she tries to play by the rules of the library, while nevertheless using her connection to the enemy to draw him out and foil (or at least understand) his plans, she comes to realise that she is not the only one preparing traps and moving chess-pieces on the board, and that everyone is not always what they seem.

The adventure is fun and the world and its rules are entertaining, but it is the characters that make the novel. It’s not that they’re drawn with incredible depth, in fact its rather the opposite, with Vale, Irene, Kai and almost every other character playing almost entirely to their stereotypes. With these simple notes, however, Cogman composes a highly entertaining score, and the pages turn easily as the story develops and the characters play their expected parts to perfection.

The founding premise of the series, of parallel worlds each on a spectrum between orderly or chaotic, allows Cogman immense freedom to invent universes inspired by the works of Arthur Conan Doyle, with a shot of steampunk and the occasional flying sleigh or talking bear. The implausible becomes plausible when things like magic, sorcery and impossible technologies are justified as manifestations of chaos that grows and fades as opposing forces of the fae and dragons bring their influence to bear on each world. More than in the previous novels, it becomes apparent that one cannot exist without the other, and that chaos and order do not correlate nicely with “wrong” and “right”, and perhaps this will be further developed in future novels that are sure to come. 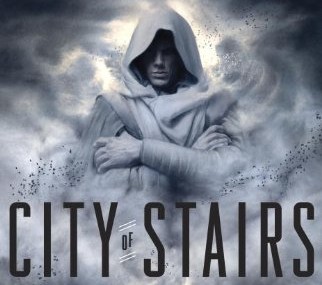 A grand novel by Robert Jackson Bennett, brought to my attention through its nomination for a World Fantasy Award, City of Stairs is many things.  It is a spy thriller. It is the concluding tome in an Epic never written. It is a fantasy novel that plays with the genre the way a cat plays with the loose thread on your favourite sweater.

The Epic landscaping involves two cities, Bulikov and Ghaladesh. The former used to be the seat of the world, built and maintained by six Divinities of varying persuasions, and the capital city of the Continent. The latter is the capital of Saypur, across the South Seas, a country that spend most of its history under the Continent’s thumb, before it’s hero, The Kaj, invented weapons capable of laying low the Divinities themselves, and at the moment of their destruction, all that they had wrought ceased to be.

That moment, known as the Blink, savaged the Continent, knocking it abruptly backward in its development and into a state of chaos.  Saypur led a peaceful invasion in the wake of this short war, bringing a semblance of order to the Continent, and creating in the process a deeply-felt resentment in the majority of the population.

Into this morass walks a Foreign Ministry agent, a sort of spy, if you will, from Saypur, called Shara. She is going to Bulikov, or what is left of the once-great city, to investigate the murder of someone dear to her. This now-dead person used to be a professor who was researching the history of the Continent and its Divinities. This is something that only citizens of Saypur can do, since any mention of Divinities, and any symbol that might refer to them, is outlawed on the Continent according to the Worldly Regulations.

What follows is a fantastic tale of gradually fading magic dating back to the time of the Divinities some 70 years ago. A multitude of objects maintain some semblance of their former power, remain miraculous. Some spells, referred to again as miracles, still seem to work despite the disappearance of the Divinities. In a manner that students of real modern history will recognise, the citizens of Bulikov and the Continent are deeply resentful of not only the occupying presence of their conquerors, but also the deliberate repression of their belief system and the humiliation, both real and imagined, imposed upon them by the victors. There simmers a reservoir of rebellion, and unhealthy things are afoot.

City of Stairs is first and foremost an exercise in world-building. The system of magic and nature of the Divinities is unique, interesting, and provides plenty of opportunity for plot twists as the underlying fabric of this world is revealed to us.

The political backdrop is also quite fully formed, with detail painted in where necessary (Ministry of Foreign Affairs, for example), and provides for a rich reservoir of nationalistic resentment that ably drives the story forward, motivating many of the main actors.

The detective story, spy novel and political intrigue are perhaps all too closely tied together, as we grow to realise that these are not different threads, but part of the same picture, and the characters we are following are not random heroes, but predictable heroes, once we learn of their own origin stories. I found this part of the book a little too convenient. I read another review that compared one character to Aragorn, but that is too generous – Aragorn, in the Lord of the Rings, had a self-determined reason to be exactly where he was, whereas Sigrud is there by virtue of coincidence. It’s all a little too neat for me.

The only other criticism I have is that I found some of the miracles worked by the Divinities a little trite. If there is magic in the world, and we give the name “Divinity” to the one who created this or that particular miracle, I feel that the miracle in question ought to be more meaningful than a cantrip that allows one to sneak into a monastery for a quick shag. Maybe that’s just me…

I found the story extremely entertaining, the world is fascinating and the concept of a civilization recovering from the loss of its very active and supportive Divinities is very original. I also feel that a lot of what needs to happen for this world to come to any sort of equilibrium has yet to happen, and so there is lots of scope for further books in this universe. I’m usually not a fan of serial novels set in the same universe because it all too often seems driven by a combination of commercial interests and a lack of new ideas, but I could certainly stand to read another novel set in this world, so it’s perhaps a good thing that another one is gestating as we speak (and a third in the planning stages).

I happily recommend this novel to readers of fantasy looking for new ideas to nourish their imaginations that go beyond finding another word for “goblin” or a new take on elvish culture, and I fully understand how it came to be nominated for the World Fantasy Awards.