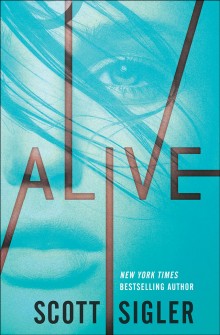 I read some strong reviews of Scott Sigler’s latest book, Alive, and was looking for something to get my teeth into as I managed to free up some time for reading again. Unfortunately, there was a gap between my expectations and what the book delivered that made it hard for me to enjoy it.

That obviously doesn’t mean that the book isn’t good, but I’m not good with young adult fiction unless it’s sufficiently complex under the surface or it has a sufficiently powerful underlying premise or message.

In this case, unfortunately, that didn’t work out for me.

This is a book that keeps a secret from you and sets up a big reveal. You feel the secret building as you go, in the unanswered questions and in the gaps between the questions that have been asked, and that gets you to keep reading, playing a game of guessing the outcome before the story gets to the point where all is revealed.

It’s like painting with negative space, where it’s the bits of the canvas you don’t actually fill in that contain the detail of the image, and you can only see the shape of what’s being drawn when either the rest of the canvas is sufficiently filled for a shape to emerge, or when the artist helpfully traces a line around the edges of the object on the page.

As a consequence, there’s very little I can say about the book without revealing the contours or that image and spoiling the story for you.

As an aside, the author has a request to reviewers at the end of the book asking that they not reveal “spoilers”, and obviously I wouldn’t, but isn’t it sad that it’s necessary for an author to actually outright ask people not to spoil the book for others.

The reveal is satisfying (it’s not like Lost, at the end of which I was abruptly furious with the writers), in the sense that everything does hang together. Unfortunately it wasn’t interesting enough for me to feel that it was worth the buildup. Luckily, since the writing style is clear and the story fairly straightforward to follow, I blasted through this book so fast that I didn’t feel I had lost loads of time on it, so I wasn’t upset. It was more like a meal that leaves you strangely unsatisfied at the end of it.

What I can tell you is this – a group of youths awaken in coffins, they have no memory of how they got there, no idea what they are doing there, and no knowledge of their own names except for the engravings on the coffins they woke up in. From there they start to explore and discover their environment, and others like themselves.

The youths are marked with symbols on their foreheads, and these symbols correlate to specific skills and/or character attributes, which are drawn with so little subtlety that you have absolutely no doubt about who is what. It does get a bit tedious having people referred to as circle-stars or whatever, and the author in my opinion tries to mine this somewhat shallow vein for more than it’s worth.

As they explore, they will discover more about what they are doing there, who they are, and what’s going on. The big reveal isn’t wholly original, although there are interesting aspects to it which I thought were great and could have been explored more fully – but I can’t tell you what they are without comprehensively ruining the novel, and for all my reticence to rank it highly, it is probably quite a good read in the young adult category – I’m just a poor judge of that kind of material because it doesn’t push my buttons.  At the same time, there are scenes of brutal violence which don’t really belong in the YA category, so I’m not sure what to make of the book overall – it doesn’t sit well in any of the categories.

It’s the first part of a three-part series. I can see where the story could go, but don’t really feel the need to find out exactly what happens next, and will probably give the rest of the series a miss.

Some reviewers loved this book, so read other reviews before you decide, I seem to be somewhat of an outlier on this one.